For The Sake of Calmness (Works)

For The Sake of Calmness

For The Sake of Calmness Press Release

Thomas Erben Gallery is very excited to present Tehran based Newsha Tavakolian‘s For the Sake of Calmness (19min, 2020).  The film depicts a bifurcated state of mind, removed from the real world while being hyper sensitively affected by it. Usually, Tavakolian’s camera is directed towards other people’s struggles – the artist is a member of Magnum Photos since 2019 – but here she directs the lens inwardly, taking her recurring experience with PMS as a point of departure. Tavakolian’s inner monologue leads us through a labyrinthine set of scenes, each hauntingly speaking of painful stasis. Unable to express their emotions, the film’s protagonists instead transpire their interior tensions. With redemption seemingly out of reach, For The Sake of Calmness offers an apt metaphor mirroring our current uncertainties.

This is Tavakolian’s third solo presentation with the gallery which includes her 2013 exhibition Look as well as the presentation of Pages of an Iranian Photo Album at Art Basel Hong Kong (2016).

About For the Sake of Calmness, the artist states: “In this film, I focus on the way the tediously repetitious transformation of my body – PMS – affects my perception. I speak of being immersed in the reality of one’s own life, and yet remaining painfully aware of what lies outside of it. But how does one visualize an amorphous idea, one that has become abstract to the point of obscurity? Landscape, real and imagined, provides the backdrop for my visual narrative, while sound, intertwined with my monologue, adds a third dimension to my portrayal speaking of the contradiction of being unmoored from the real world and yet achingly affected by it.”

Throughout her career, Tavakolian’s work has been exploring social experiences in her homeland and human conflicts globally. She has photographed female guerilla fighters in Iraqi Kurdistan, Syria and Colombia, prohibited Iranian female singers and the lives of people living under sanctions. Tavakolian was the fifth Laureate of the 2014 Carmignac Gestion Photojournalism Award and the Principle Laureate of the 2015 Prince Claus Award. Her work is collected by prestigious institutions such as the Victoria & Albert Museum, Los Angeles County Museum of Art, British Museum, Art Institute of Chicago and the Museum of Fine Art Boston, amongst others. 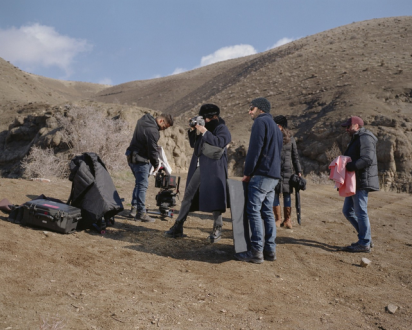